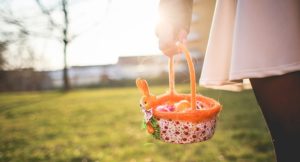 “He is not here, but He has risen. Remember how He spoke to you while He was still in Galilee, saying that the Son of Man must be delivered into the hands of sinful men, and be crucified, and the third day rise again.” And they remembered His words. Luke 24:6-8

When adults participate in Easter egg hunts, a hiding place must be picked with great care: deep in the bushes, cleverly disguised in a colorful flower bed, or high up on a tree branch.

But when you hide eggs for young children, the goal changes. You want each child to find what you’ve set out for them: in the middle of the lawn, right along the rocky path, or on the steps leading up to your house. You delight in their joy as they pick up what you never really tried to hide.

During Jesus’ time on earth, His plan and purpose were set out for the world to see.

– When Jesus was born, an angel told a group of shepherds that the Savior of the world had arrived. The shepherds then went out, found Jesus, and spread the angel’s message (Luke 2:10-11, 17-18).

– John the Baptist proclaimed Jesus’ identity: “Behold, the Lamb of God who takes away the sin of the world!” (John 1:29).

– When Peter said to Jesus, “You are the Christ, the Son of the living God,” Jesus called Peter blessed and said it was the Father who had revealed this truth to him (Matthew 16:15-17).

– Jesus told the Jews, “Unless you believe that I am He, you will die in your sins.” And when they asked who Jesus was, He replied, “What have I been saying to you from the beginning?” (John 8:23-25).

Like bright, beautiful eggs scattered across the short grass, Jesus’ claims about His identity and destiny were clear, plain, and ready for the gathering. In the right time, all along the path of His life, He left behind treasures of truth for those who would have eyes to see them.

In Matthew 11, Jesus cried woe against those who refused to repent despite what they’d seen. Then He said, “I praise You, Father, Lord of heaven and earth, that You have hidden these things from the wise and intelligent and have revealed them to infants” (verse 25; see also Luke 10:21).

It’s a humbling yet ultimately comforting picture, isn’t it? We’re called to be like children full of wonder and excitement, wandering through the yard on a hunt for hope. In our helplessness, we have no skill to find things hidden behind rocks and way up in trees. But praise God! He scattered hope right in front of our eyes and revealed it to our eager hearts.

This Easter, may we remember who Jesus is and what He has done—and may we thank Him for making His love so plain to see.

For God so loved the world, that He gave His only begotten Son, that whoever believes in Him shall not perish, but have eternal life. John 3:16

From your friends at Christian Mommy

« What Does Being Active in Your Child’s Faith Really Look Like?
Discover How to Make Mealtime Memories with Your Kids »