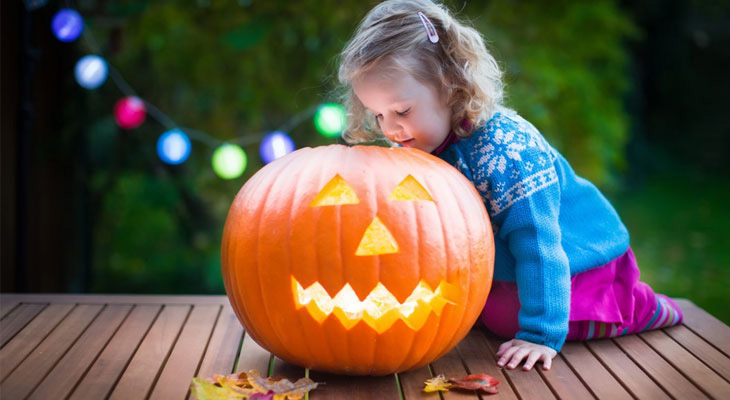 As a Christian mom, Halloween has always been the hardest day for me to figure out. Fresh out of seminary, I was full of facts and hundreds of reasons to ignore the day, so in my first years of mothering, that’s what we did. I just acted like nothing was going on. Of course, as the kids grew older, that plan went out the window. As early as preschool, they knew something was up. And that something called Halloween seemed fun, even if it had a little scary attached to it.

For several years, we chose the alternative Halloween option among Christians, the ever popular Fall Festival, also known as the Trunk or Treat, Harvest Carnival, and so on. At least with a Fall Festival, the kids could dress up in a not-scary costume, and there was candy to be had and games to play, so for many years they were satisfied with whatever the church was doing that night.

But one day they realized that most of their friends didn’t go to Fall Festival at Halloween. Their friends stayed home in their neighborhoods and went trick-or-treating door-to-door at dusk in costumes. And my kids thought that sounded way cooler, except their mom was stuck. Costumes. Trick-or-treating. Door-to-door. It felt like an outright celebration of Halloween to me. For years I had told the kids, “We are not going to celebrate evil.” And my head just couldn’t get there.

It finally hit me. My kids do not want to celebrate evil. Not one of them likes to be afraid or even watch scary movies. They don’t want to exalt darkness or cast spells or buy into the hype about wickedness. They just want to have to have good, clean fun on Halloween. So what was a mama to do? Hallelujah, that’s what.

Somehow I decided that the whole world might spend a day focused on darkness, but we certainly didn’t have to. So our house went alternative. The first year I came up with this party I called “Hallelujah on the Driveway.” I decided that our house was going to be a light in the dark on Halloween.

A couple of days before Hallelujah, I sent email invitations to all the neighbors and some friends from church. I told the kids they could invite anybody they wanted to. My friend Lisa and I spent one afternoon stringing up every line of white Christmas lights I had outside across the driveway. My dad brought a couple of fire pits over. We had white candles in lanterns everywhere and as many happy pumpkins as we could carve.

That first year, about 80 people showed up. No one had to do anything but enjoy one another, visit, and laugh. The kids went to trick-or-treat in big groups, stopping back by the house for another snack every so often. Our little house was truly a light in the dark that night. We had a blast!

As you can imagine, Hallelujah on the Driveway has officially become a family tradition. The Hallelujah has become our way of saying to the world, “We don’t need dark and spooky to have fun. We’ll take your day and trump your scary with light.” What has been especially fun is that our friends love coming over, watching the kids, and sitting in lawn chairs by the fire. And our kids’ friends love having a great alternative

I really think Hallelujah could sweep the nation. Families taking the day back. Reaching out to the neighbors. Keeping it simple. Loving their kids and their kids’ friends. Laughing a lot. Roasting s’mores. How much sweeter does it get than that?

Hallelujah instead of Halloween? Why should we even consider such a thing? Well, mainly because I think we’re supposed to live the truth of the Scriptures every single day of the year.

You are the light of the world. A town built on a hill cannot be hidden. Neither do people light a lamp and put it under a bowl. Instead they put it on its stand, and it gives light to everyone in the house. In the same way, let your light shine before others, that they may see your good deeds and glorify your Father in heaven (Matthew 5:14-16).

Mom, whatever you do this holiday, don’t miss an opportunity to share the love of Jesus with others!

Angela Thomas is a speaker, teacher, author, and a proud mom of four young adults.