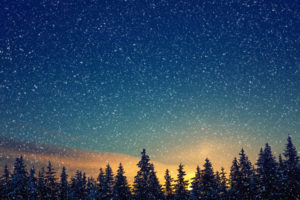 Mom had been sick since the fall. At first she said it was just the flu, or maybe a cold. Then she thought it could be pneumonia. Then she joked that it was probably the plague.

It wasn’t the plague, of course. It was colon cancer. Well, it had started out as colon cancer. By the time it was diagnosed, it was everywhere cancer. Two weeks after the diagnosis, on Christmas Eve, my father laid her into the arms of Jesus.

Christmases have a way of blending into one another. The same ornaments on the tree. The same family gathered at the table. The same Scripture read before the meal. This is how Christmas ought to look, we think.

But that Christmas was new.

The morning after my mother died, I went downstairs and flicked on the lights. That was the first new thing: I’d never come down to a dark kitchen on Christmas morning. Mom always got up first to get the coffee started and roll out the pie crusts.

I made Christmas breakfast for the family. That was the next new thing.

We went through the motions of Christmas morning. We opened presents slowly. And after the wrapping paper had been cleaned up, my father and brother drove to the funeral home to make arrangements.

We’re coming on up on the third Christmas without Mom. Since then there have been lots of new things.

This past Sunday, my three-year-old daughter dressed up as a sheep for our church’s nativity play. (She wanted to be a monster, but I convinced her to be a monster pretending to be a sheep. That’s a parenting win!) The kids stood up at the front of church, Mary tripping over her robe and the shepherds whacking Joseph with their staffs and angels with crooked wings yelling “Gloria!” and various sheep wandering in and out of the scene. It was as ragtag a crew as the first nativity must have been.

Eventually most of the kids faced the same direction and sang, not all in the same key, “Hark! The Herald Angels Sing.” And they got to the last verse—

Light and life to all He brings

Ris’n with healing in His wings

Mild He lays His glory by

Born that man no more may die

Born to raise the sons of earth

Born to give them second birth.

And it struck me—It’s not a Christmas song at all, is it? It’s an Easter song. It’s a song about other new things: new breath in our bodies, new songs in our lungs. It’s a song about a Savior who reigns victorious over death itself.

At Christmas, everything gets tangled up—past and future, birth and death, manger and cross. So this is my prayer for you: May your Christmas celebrations be tangled up with Easter. Whatever your grief, whatever your sorrow, whatever your heartache, may it be enveloped by the promise of the resurrection.