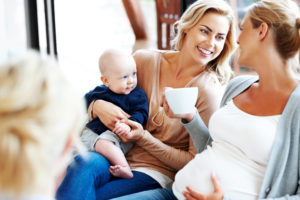 I was drafted into the Mommy Wars when my first baby was barely in my womb. Sitting with some trusted friends, I mentioned the name of my OB/GYN. Big mistake! After an awkward moment of silence, one of the other women went on to coyly describe her OB/GYN with adjectives that might make you think he was a borderline miracle worker when it came to pain, godlike in securing the safety of the baby, and had a bedside manner that made him a comedian. In hushed whispers, but not to me, I later overheard the woman suggesting my doctor was virtually a serial killer. They didn’t think they should tell me that?

Unless you have a good pair of proverbial boxing gloves, beware of these top ten topics that fuel the Mommy Wars. Read number two in an attitude of prayer to avoid overreacting, please.

For the record, my doctor didn’t kill me or my babies. ‘Nuff said.

Does the fact that I had an epidural for my first birth mean I’m a wimp? Is it justified by the fact that it was an 18 hour labor followed by an emergency c-section? Oh, wait. No. I shouldn’t have written that. C-sections make you less of a woman, don’t they? My second baby was born au naturale, which made me feel pretty heroic, but I said no to the catheter which made me pretty unpopular with the nurses. I guess that’s why today’s mommies are paying solid greenbacks for birth liaisons so they don’t even have to talk to the hospital staff. Give me a break. Babies have been born for centuries by woman who squatted in a field and then went back to picking green beans!

New moms beware: don’t ever ask advice on what kind of formula to buy your newborn. You’ll be accused of feeding your baby poison. I weaned my babies at 6 months and for that I was told, “They say children will most certainly die of a terrible disease if you deny them immunity by failing to breastfeed long enough.” But when a co-worker of mine was still nursing at 2 years it was, “They say a child will end up with a combination of borderline personality disorder and obsessive compulsions of an uncharacteristic nature if you breastfeed too long.” Who are “they” anyway? No one ever says.

Don’t even bring this one up before you put your boxing gloves on. You might as well just hire professional ring announcer Michael Buffer to come shout, “Let’s get ready to rumble.”

I’m fairly certain the strong opinions moms have about sleepovers are rooted in our Freudian experiences that began during early parenting co-sleeping or the lack thereof. Expect to hear that you’re in danger of killing your baby if you co-sleep, and certainly disrupting your child’s attachment process if you don’t. That will eventually turn into a mommy war of another kind when your child is asked to his or her first sleepover…in kindergarten, because that’s when socialization is most enhanced by a tearful night spent in someone else’s basement where there is no doubt a clown costume hanging from the rafters. Of course, some moms will tell you that’s good for your child. Children like to be afraid. They just don’t know it yet.

4. The Age of Accountability

Skip this one if you’re not a Christian. Oh, never mind. You could just reclassify it to be about the age at which children should be allowed to have personal electronic devices. Because you’ll certainly be called a prude if you wait, but if you don’t you’ll be one of the parents we all hate because our children come home from school begging for a smartphone because your child has one. But seriously, the age of accountability.

Apparently it is a bona fide fact that telling your daughter not to wear yoga pants to school is a cruel form of body-shaming from which she may never recover. Or is it, since you’re trying to help her focus on her brains not her body? And that dad who wore short shorts out in public to teach his daughter not to…he’s either your hero or the Antichrist, but there’s really no in between. (I was once called the “Christian Taliban” for encouraging my daughters to dress modestly. That left a mark.)

Unless you’re an expert in mercury levels, pharmaceutical economy, Jenny McCarthy, autism, government conspiracy, and STD’s just don’t bring this topic up. It’s the mother of all bad words in the Mommy Wars and is sure to make things go nuclear in a millisecond.

This is perhaps the most hermenuetics-worthy topic of them all. Speaking of which, if you really want an intelligent conversation about the Mommy Wars instead of this superfluous waft of sarcasm, there’s a great recent intelligent article on the topic on Christianity Today’s Her.Menuetics blog. But before you read that, consider this:

When it came to the Mommy Wars, I went AWOL. I decided early on that I wasn’t going to be a mom that wounded other moms. Instead, I was going to have their backs. And now I’ve written a new book on The 20 Hardest Questions Every Mom Faces, so we can encourage one another instead of tearing into each other. After all, there’s no one right answer to most of our hardest questions. But if we try, we can pray our way to realistic, biblical answers for our own family and each individual child. Let’s stick together, moms.

Instead of preying on each other, let’s start praying for each other. 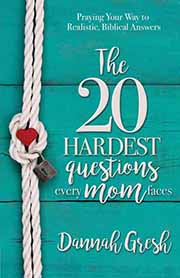