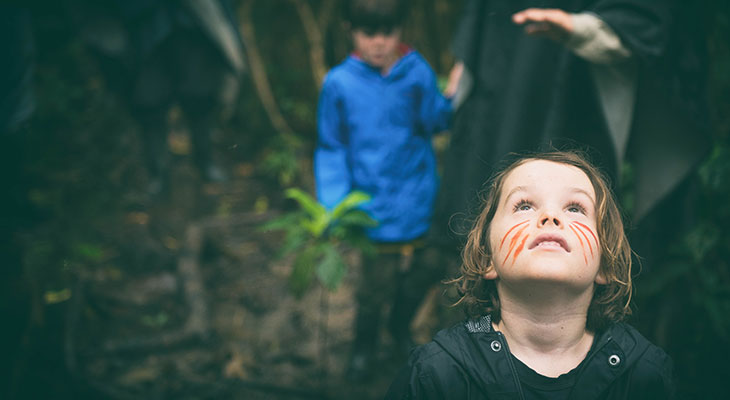 At vacation Bible school a few weeks ago, my four-year-old spontaneously marched on stage and joined the worship team in leading 150 adult volunteers and 100 children in worship. Having no practice, no idea what the motions were, and zero clue what he was singing, he led with bravado, much to my seven-year-old’s chagrin. Each evening that week, his generous teachers let him sneak up on stage and lead. He was proud of himself for his courage, and his dad and I were proud of him too (despite our chuckles and apologies).

When our family gathers to reflect on each day’s events, I regularly ask our kids, “How were you brave today?” We talk about their accomplishments, and I revel in their responses:

“I shared during circle time.”

“I stood up on stage and lead worship.”

Bravery has been revived as a cultural value. It’s something we want for ourselves and for our children. We aspire to be noble. I have a bracelet that says “Be Brave.” It is a gentle reminder to steel myself for the challenges facing me.

Asking for forgiveness from a friend.

In the Old testament, God often encourages people to be brave. In Joshua chapter 1, Moses has passed away and the Lord appoints Joshua as Israel’s leader. He commands Joshua three times in the first nine verses to be courageous. “Be strong and courageous. Do not be afraid; do not be discouraged, for the Lord your God will be with you wherever you go.” After sharing the Lord’s vision for the people, Joshua listens to their response. The Israelites echo God’s command, saying, “May the Lord your God be with you…Only be strong and courageous!”

Each time we read the word “courage,” we also read about the God who grants it.

When Deborah, leader of Israel, rallied Barak and the troops to launch into battle with Sisera, she reminded them, “Go! This is the day the Lord has given Sisera into your hands. Has not the Lord gone ahead of you?”

Can you imagine the people’s conversations? Outside their tents, the tension is palpable. Deborah stands in front of her warriors. They are ready for battle but likely terrified. Deborah is propelling them into one of the most intense experiences of their lives. She was responsible for providing inspiration and courage to her army. And she did it by reminding them that the Lord went ahead of them.

God gives us courage. As much as we try to summon it, bravery doesn’t come from our own will.

When Jesus was in the garden of Gethsemane in the hour of his greatest fear, he didn’t look inside himself or his closest advisors to conjure courage. Instead, he left the disciples, asking them to pray for him, and withdrew to get on his knees before the Father.

Submitted himself to the will of the Father.

Went back to his friends and performed a miracle before being beaten and killed.

Remember, mom, your courage comes from the Almighty, who faced the cross. The enemy cowers before the Father, who gives you courage.

Rachel Spier Weaver is a recruiter at Hope International and the coauthor of A Fearless Leader: A Bible Story About Deborah. She is passionate about sharing stories of women of God who led in extraordinary ways.

« Is God Preparing You for a Season of Growth?
How Can You Help Your Children Discover Their Identity? »