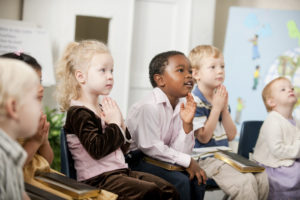 During Vacation Bible School this summer, our church collected an offering to help an orphanage in Mexico. The kids were all encouraged to bring what they could to contribute toward the cause.

My daughter, age 7, has always been very generous with her allowance and came running down the stairs with a Ziploc bag of piggy bank money the morning after the collection was announced. I smiled with appreciation for her giving heart and told her, “I’m so proud of you. You always want to share your allowance with others. That’s wonderful, sweetheart.”

She looked at me, gave a slight shrug, and replied, “It’s JUST money I had in my piggy bank. It doesn’t really matter.”

My blood immediately went to a rolling boil. I have worked really hard to teach my kids the value of money and emphasize how grateful we need to be for every small thing we have. I couldn’t believe her cavalier attitude that morning.

I unsuccessfully tried to cover my deep annoyance and disappointment.

“You have got to be kidding me. I seriously can’t believe you just said that when we have talked so much about gratitude and generosity. That’s several dollars you have in that bag! How can you say it ‘doesn’t matter’?”

I took the bag and dumped everything out on our floor, then made piles of four quarters. I counted it all up and told her that she had $8.36.

She scooped it all up, promptly put it back in the bag and announced there was “no way” she was giving away $8.36. Before I could launch into a sermon on generosity, she was halfway up the stairs looking for her piggy bank so she could deposit her newly found riches.

There was $8.36 in that bag before and after our conversation. But something happened that drastically changed the value my daughter assigned to it—to the point that I couldn’t pry it out of her little hands just a few minutes later!

Similarly, Christianity is objectively true regardless of the value a person assigns to it. But something happens to many kids that fundamentally changes the value they place on it. Ultimately, the statistics show that at least 60% of kids reject faith by their early 20s…they decide it no longer has value. It literally becomes worthless.

Why the change? I think it boils down to three things:

1. They never understood how to value it.

In a culture where people chalk religious belief up to nothing more than a person’s opinion about what may or may not exist beyond our natural world, most kids never learn how to appropriately value their religious beliefs. They don’t, by default, come to understand that:

2. They never had time to value it.

I’m guessing that if I had put my daughter in a room without distraction and plenty of time, she could have come close to totaling up the coins on her own. But between school, homework, piano lessons, soccer and chores, there’s no way such an exercise was going to get priority. She just didn’t have the time to appropriately value what was in the bag.

It’s really easy to play the victim when it comes to the perceived predator of time. I’m hugely guilty of this myself. “I have no time!” “I just wish there was more time!” “Where did the time go?” Those are things we all say. But the fact is, we all have the same number of hours in the day. It’s a matter of how we choose to use them. If your family’s spiritual life is crowded out by the constant shuttling between extracurricular activities, it’s time to really consider that. It might not be comfortable to look at it this way, but if we’re too busy to set aside family spiritual time at least once a week (for Bible study, faith conversations, prayer, etc.), we are quite literally choosing other activities over our kids’ spiritual growth.

It’s up to us to make time for them to learn to value their faith.

3. They forgot how to value it.

Last year, I actually had taught my kids how to add up coins of different values; there was a point in time when my daughter probably wouldn’t have been so cavalier with the money because she did know how to value it. But she forgot.

It’s easy to take for granted that whatever we taught our kids last month, last year, or three years ago is still part of their working knowledge. But planting seeds isn’t enough. We have to continually water them, tend to the growing soul, and plant more seeds. Otherwise, those earlier seedlings can easily be lost, and our kids can simply forget how to value what they may have know how to value in the past.

May we all help our kids develop a faith that they clutch like that Ziploc, realizing the surpassing worth of knowing Jesus Christ (Philippians 3:8).

Learn more about Natasha’s first book, Keeping Your Kids on God’s Side, here and connect with her at christianmomthoughts.com.