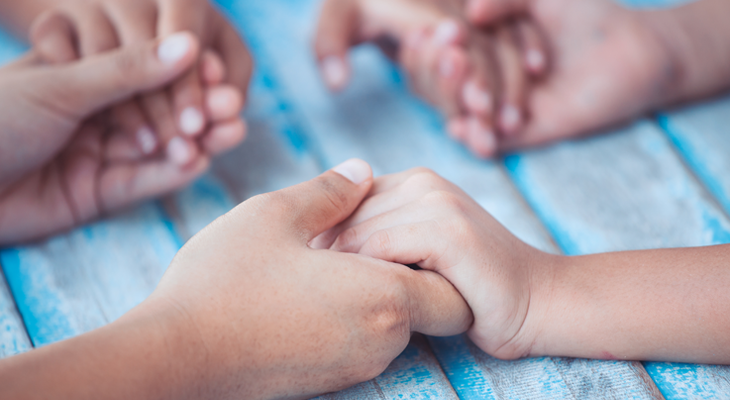 My favorite definition of a leader is this: A leader is someone who goes first.

I like it because it’s simple, it’s practical, and it makes leadership achievable. Something anyone can do who is willing to get out there, give it a try, and learn from their mistakes.

The people who follow find direction and courage in the steps of the leader. Sometimes they get a good laugh watching the leader make colossal blunders. Hopefully, the leader laughs too.

Leading in prayer can be like that. Some people talk about being mighty prayer warriors, persevering through adversity with white-hot zeal until they overcome the forces of darkness and receive from God the things they carry on their hearts.

I admire those people, but I’m not one of them. I’m more like the colossal blunderer.

But I can do this: I can go first. Most nights when my kids were little, after they brushed their teeth, after we read books and sang songs and snuggled in the big chair, I would finally (finally!) tuck each one in his or her bed, silently smooth their hair for a few seconds, and then close my eyes and say, “Dear Jesus…”

What came next was seldom impressive. In fact, it was usually so simple, so elementary, the kids could pretty much have said the same thing themselves. Sometimes they did.

And that’s the point. I went first, bumbling along, and they followed. They learned about…

My part took about twenty or thirty seconds, and then it was the child’s turn. Some of the words I used showed up in their prayers too (because that’s what happens when someone leads). Some of the feelings that leaked out of me seeped out of their hearts as well. And some of the deep mysteries of God—that He likes us, that He is good, that He is always with us—began guiding their prayers, just as they guided mine.

Those times became less frequent as the kids grew older (I didn’t have the energy to stay up as late as they did). But our well-established habit of keeping our prayers simple and honest and real continues today.

Gene Skinner is a longtime editor at Harvest House. He and his wife, Pam, continue their tradition of bedtime prayers when their five grandchildren come to visit.